E-mail: This email address is being protected from spambots. You need JavaScript enabled to view it.

The director of the establishment is Elena Sergeevna Kopytok. 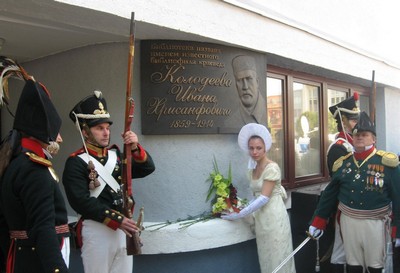 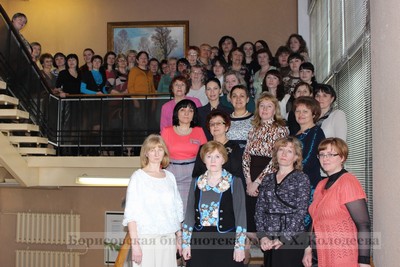 Borisov central district library named after I.H. Kolodeeva is a social and cultural center of Borisov district, modern, informative, spiritual and educational, scientific and research establishment, which provides gathering, safety and presentation of documents and information to the citizens of Borisov and its district.

Information resources make 650 thousand of copies of documents. The funds of the libraries are enriched with new books, periodical literature, electronic and other documents every year. More than 50% of new documents of the total number come to rural libraries.

The most effective informative library service is achieved by creating, promoting detailed and update information about the library and its work based on new informative technologies. An important moment in this work is the presence of web-resources in the libraries.

A renewed official website of the library https://borlib.by/ is working actively. The main website sections are also developed: a poster, the news feed of events, about the library, for readers, services, resources, etc.

One of the work forms with off-site users on the Internet is the creation of thematic blogs and presentation of library groups in social networking. The libraries have 25 Internet-representations in the blogosphere, microblog “Twitter”, social networking: “Odnoklassniki”, “VKontakte”, “Facebook” and “YouTube”.

The Department of Central library as a socio-cultural center determines the creation of new units in its structure in recent years: spiritual and educational center, the department of literature in foreign languages, regional history center, the sector of rare book and collection of autographs, the department of gallery and exhibition activity, the structure of which includes: the art gallery of the laureate of State prize of the Republic of Belarus, the honored artist of the Republic of Belarus, the citizen of honor of Minsk region and Borisov district Valery Shkarubo, the art gallery “Z’yva”, museum and exhibition complex “Partners. Friends. Sister-cities”, the exhibition complex in the 2nd floor lobby of the library. In May 2017 the opening ceremony of the interactive children’s education and leisure center “RostOK!” was held, which are thematic laboratories and leisure: the laboratories of design, electronics and programming #TheWorldofdetails, technology and creativity #CreativeHall, studying of the English language #Englishforkids, #Softreading (loud reading of fiction literature), #HappyTime (free time with books, magazines, coloring books); big games #Boardgames and theatre area #TheTheatrescreen (the puppet play of theatre “Teremok” and “Vandroyny chamadanchic”). On 25 November the opening of the memorial exhibition hall of I.H. Kolodeev and the history of war 1812 was held. The exhibition presents plans, maps, documents and material items revealing the history of suburb of New-Borisov of the period of life of Kolodeev family (the second half of XIX – the beginning of XX centuries). A separate section is devoted to the activity of Borisov clubs of military-historical reconstruction of the period of Napoleonic wars. An outstanding feature of the exhibition is the ability to hold the exhibit items in hands, try on the elements of uniforms and take photos.

In May 2017 in the city library №1 a museum exhibition display “Rarity-vintage of the 20th century” started working, dedicated to the Year of Science. Being acquainted with the exhibits of vintage audio, you can retrace the evolution of scientific and technological progress; see what the world of technical inventions was during the last century. The priority activities of the libraries of Borisov region are informative and educational, gallery and exhibition, museum, excursion, international, educational, spiritual and patriotic work and organization of useful leisure of library users.

In the libraries there are 29 clubs. In the children’s department of the central library a creative association “Padzeya” was created, the participants of which prepared more than 10 theatrical productions of literary works by Belarusian and Russian writers.

Social and cultural life of the libraries is connected with organization and carrying out lots of mass cultural events (offers, contests, exhibitions, educational, playing and entertainment programs, discussions, creative meetings with the authors and their book presentations, memorable and anniversary events in the life of creative unions, etc.). About 6.0 thousand of educational events are held during a year. More than 30 international, regional and virtual informative and educational projects and programs are held in the libraries (“Media-bus “DeutschExpress”, “Borisov-Pskov Regions: Facets of Cooperation and Interaction”, “Children and Teenages who Read are Reading Nation!”, “We Can’t Live Without Each Other”, “The Sun on the Page of a Book”, “Keep Yourself Alive”, “ To Book and Reading through Activities and Communication”, etc.).

Children of preschool, primary and secondary school age are happy to take part in library activities, contests, quizes, tournaments, entertainment and playing programs (“Happiness to be a Reader”, “The library Under the Umbrella”, “Read to Children about the War”, “The Features of Hometown”, “Big Games” and others).

For the youth category of readers spiritual, moral, patriotic, aesthetic upbringing and education events and promotion of healthy lifestyle are regularly held (conversations “About Christening”, “About the Wedding”, “Mind Health from your Youth!”, the program “The Soldier under the Christ’s Flag”,  brain-ring “The Shield of Faith: the Power of a Word or the Poison of Swearing”, antismoking action “Smoking is Harmful for Our Health”, etc.).

A particular attention is paid to the barrier-free environment. Orthodox clubs work for readers with disabilities in the spiritual and educational center of the central library: “Parus” (for young disabled people together with the department of day care for the disabled State Institution “Territorial Center of Social Service of the Population  of Borisov district”) and “Revival” (for families with disabled children together with Borisov department of Belarusian Association of assistance to disabled children).

The city specialized library №5 works for sight-disabled people, and the program “A Special Needs Child” (the work of visual impairment corner for sight-disabled children, where the reading complex with amplifying sound card, column speakers and headphones and electronic magnifier that increases the text 32 times is installed) is also realized in the children’s department of the central library.

The educational activity of the libraries of Borisov district is constantly covered on local TV channels “Svet TV”, “SKIF” and the national television. In 2022 67 TV reports were made on local TV channels: ONT channel – 1 report, STV – 1 report, TRO Union – series of programs “The Map of Motherland” about tourist and cultural places of Belarus and Russia.

In order to promote the Belarusian and world literature the staff of the central library in cooperation with the journalist of the regional radio program “Naviny Barysawshini” create weekly information radio releases “ Literary breakfast” and “Evening with a good book”.

The articles of the library staff in the national, regional and local media are published mainly on local history and library topics: in newspapers “Adzinstva”, “Minskaya prayda”, “Culture” and magazine “Bibliyatechny svet” (in 2017 – 26 publications).

Within the framework of social and cultural international cooperation, the central library organizes art and photo exhibitions with the Russian Center of Science and Culture, the Information Center of the US Embassy and embassies of the Czech Republic, Israel, etc. Webinars, video broadcasts, online conferences with the libraries of the Russian Federation are also held. The Agreements on cooperation with a number of libraries of sister-towns have also been signed. The international library project “Media-bus “DeutschExpress” is implemented together with Goethe Institute in Minsk (bookmobile with literature, audio and video materials in German).

In the course of professional visit of employees of the Borisov Central Regional Library named after I.H. Kolodeev in September 2017 on the basis of the Municipal Autonomous Institution of Culture “Centralized Library System” of Pskov a roundtable discussions “Strategy of Development of Modern Libraries in a Changing World” took place. The result of the roundtable discussions was the signing of the International library project “Pskov-Borisov Region: Facets of Cooperation and Interaction” for 2017-2019.

Over a number of years the library is a participant and winner of national contests:

Republican contest “Library is a Core Part of National Culture”:

In 2013 – the first prize in nomination “For Preconceptual Study and Research Work”;

In 2014 - the first prize in nomination “For the Innovations in the Sphere of Library Service”;

In 2015 - the first prize in nomination “For the Support and Development of Reading”;

In 2017 – the third prize in nomination “For the Innovations in the Field of Librarianship”.

In 2022 - the first prize in nomination “For the Support and Development of Reading”;

Republican contest “Library is the Center of Spiritual Education and Upbringing”;

In 2015 - the first prize in nomination “Family is the Successor of Moral and Spiritual Values”;

In 2016 - the first prize in nomination “Family is the Successor of Moral and Spiritual Values”;

In 2017 – the encouragement prize in nomination “The History of Orthodox Christianity of the Country”.

In 2017, the library received a Grant from the President of the Republic of Belarus in the field of culture for the development and implementation of the innovative project "1812. Borisov. Berezina. Memory...". In the framework of the project in the publishing house "Four quarters", a book of the employee of the regional center Vladimir Kishchenko "Legends of the Borisov Region: Myths and Reality" was published. In addition, 2017 for the library was marked by the victory in the nomination "Librarianship" in the Republican contest "The Man of the Year of Culture" and the entry on the Board of honor of Borisov district on the results of 2016.